A shocking 70% of American adults are either overweight or obese.* During any given year, an estimated 45 million Americans are “on a diet.” As our waistlines grow, so does the cost of health care. We can no longer afford to ignore the obesity epidemic in this country.

Obesity is strongly associated with a number of chronic conditions including cardiovascular disease, type 2 diabetes, knee osteoarthritis, and some cancers.

With over two-thirds of the population overweight, it’s no wonder the weight loss industry in the U.S. exceeded $72 billion in revenue in 2019. Promises of rapid, life-changing weight loss rarely live up to the hype, and many diets are questionable at best.

What the Experts Said  |  Definitions Used in Rating the Diets

Each year, U.S. News and World Report releases their annual ratings of popular diets. Some diets are deemed safe, nutritious, heart-healthy and effective for weight loss. Other diets are strongly criticized for restrictiveness, nutritional deficiency, safety and sustainability.

For 2020, a team of 25 nutrition experts, including registered dietitians, physicians, and nutrition scientists rated the effectiveness of 35 different diets in the following areas:

(Additional details regarding these areas can be found at the end of the blog.)

After scoring each diet in each area, the team ranked the diets in several different categories, including:

In the best diets overall category, the Mediterranean Diet came out on top, followed closely by DASH Diet, while the Flexitarian Diet and Weight Watchers Diet finished third and fourth, respectively.

In the best heart-healthy diets category, the Ornish Diet led the pack, followed closely by the Mediterranean and DASH diets.

At the other end of the spectrum, the Ketogenic Diet and the Dukan Diet finished dead last at #34 and #35, respectively. The Alkaline Diet and Paleo Diet also ranked poorly at 28th and 29th respectively, in the best diets overall category.

For heart health, the Whole30 Diet and the Dukan Diet brought up the rear behind other dietary losers like Alkaline, Keto and Paleo.

WHAT THE EXPERTS SAID

You might be interested in some of the specific comments made by the expert panel regarding some of these diets:

DEFINITIONS USED IN RATING THE DIETS

*Overweight in adults is defined as a body mass index (BMI) between 25.0 and 29.9 kg/m2, while obesity is defined as a BMI greater than or equal to 30 kg/m2. Use this link to calculate your BMI.

Please note that BMI is not a valid indicator of body weight status for individuals who are extremely muscular. However, such individuals make up only a tiny portion of the U.S. population. A new study on insomnia in postmenopausal women suggests that consuming refined carbohydrates may keep you awake. The findings were published online in The American Journal of Clinical Nutrition.

Investigators analyzed food diaries from more than 50,000 participants in the Women’s Health Initiative and looked at whether women with a higher dietary glycemic index were more likely to develop insomnia.

Previously, researchers have been unable to confirm whether refined carbs trigger insomnia or whether insomnia causes individuals to eat more sweets. In this study, investigators sought to determine the role of carbs in creating sleep problems by looking for the emergence of insomnia across different types of diet.

The link they discovered between high glycemic diets and insomnia can be attributed to the quick spike in blood sugar after eating highly refined carbohydrates, like added sugars, white bread, white rice and soda. An increase in blood sugar causes the body to release insulin and other hormones—such as adrenaline and cortisol—that interfere with sleep.

The study also found that women whose diets contained higher amounts of vegetables, fiber and whole fruits were less likely to develop insomnia.

“Whole fruits contain sugar, but the fiber in them slows the rate of absorption to help prevent spikes in blood sugar,” said the study’s senior author, James Gangwisch, PhD, assistant professor of clinical psychiatric social work at Columbia University Vagelos College of Physicians and Surgeons, in a ScienceDaily press release “This suggests that the dietary culprit triggering the women’s insomnia was the highly processed foods that contain larger amounts of refined sugars that aren’t found naturally in food.”

While the research focuses primarily on postmenopausal women, the effects of carbs on blood sugar are true for most people and suggest the study has broader applications.

“Based on our findings, we would need randomized clinical trials to determine if a dietary intervention, focused on increasing the consumption of whole foods and complex carbohydrates, could be used to prevent and treat insomnia,” said Gangwisch. 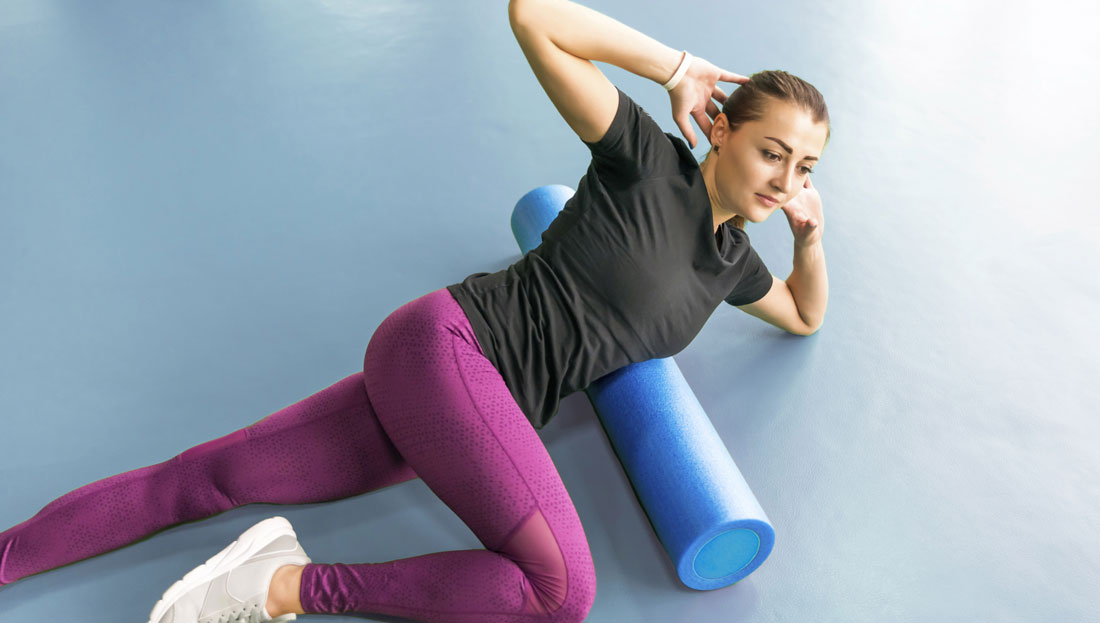 This study was first published in the peer-reviewed International Journal of Research in Exercise Physiology.
Print A Copy

Foam rollers, which are a mainstay in many fitness facilities, are often used as a form of self–myofascial release (SMR) during the warm-up of an exercise session or as a means of recovery between workouts. But what exactly is foam rolling meant to accomplish and how effective is it at achieving those objectives?

First, a primer on fascia and SMR: Understanding the concept behind SMR requires an understanding of the fascial system itself. Fascia is a densely woven, specialized system of connective tissue that covers and unites all of the body’s compartments. The result is a system in which each part is connected to the other parts through this web of tissue. Essentially, the purpose of the fascia is to surround and support the bodily structures, which provides stability as well as a cohesive direction for the line of pull of muscle groups. In a normal healthy state, fascia has a relaxed and wavy configuration. It has the ability to stretch and move without restriction. However, with physical trauma, scarring or inflammation, fascia may lose its pliability. SMR is a technique that applies pressure to tight, restricted areas of fascia and underlying muscle in an attempt to relieve tension and improve flexibility.

The mechanisms and benefits of performing SMR on a foam roller are unclear, as research findings are often inconclusive or inconsistent. There are a few different potential reasons for this, including the fact that no standard protocol for foam rolling exists. Therefore, when trying to draw conclusions by looking at the results of multiple studies, it’s often a case of comparing apples to oranges.

In an effort to bring some clarity to the topic, ACE asked John P. Porcari, PhD, and his research team in the Department of Exercise and Sport Science at the University of Wisconsin–La Crosse to evaluate the training effects of foam rolling on lower-body flexibility and mobility and performance.

The research team recruited 34 volunteers to participate in the study (Table 1). Due to the physical demands of the testing and training procedures, participants were required to be at least recreationally active (i.e., exercise a minimum of three times per week for at least 30 minutes) and have no prior lower-leg injuries or cardiovascular or orthopedic contraindications to exercise. The participants were placed into either a foam-rolling group or control group. 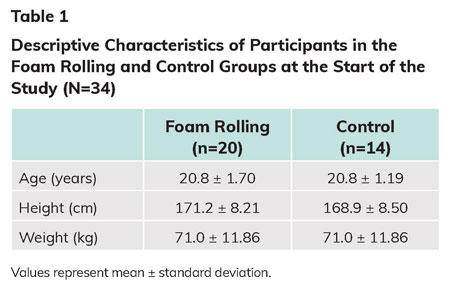 The study began with all participants attending an orientation session, during which they had a chance to practice all of the tests that were later administered as part of the study. In addition to height and weight, the following baseline data were collected during this session after a five-minute warm-up: ankle and knee range of motion (ROM), hamstring flexibility, vertical jump height and agility.

It is important to note that ROM and flexibility were measured using active assessments. For example, the participants were asked to dorsiflex the ankle as far as possible while seated upright on a table with legs straight and only the ankles off the edge of the table, at which point the measurement was taken. Dr. Porcari suggests that the difference between active and passive assessments (wherein a researcher pushes the ankle to achieve maximal dorsiflexion) may be another possible cause of some of the conflicting data found in the research on the topic of SMR.

To measure knee flexion, participants laid prone with their knees at the edge of the table and were instructed to flex their knees as much as possible. Hamstring flexibility was assessed using a sit-and-reach test. Finally, a vertical jump test to assess muscular power was conducted, as well as the T-test to assess agility (Figures 2 and 3). 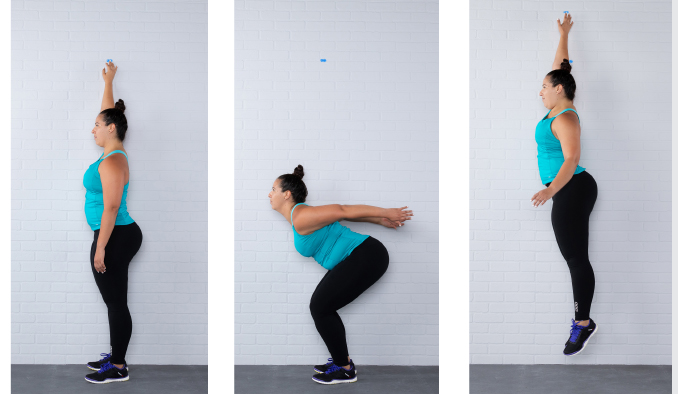 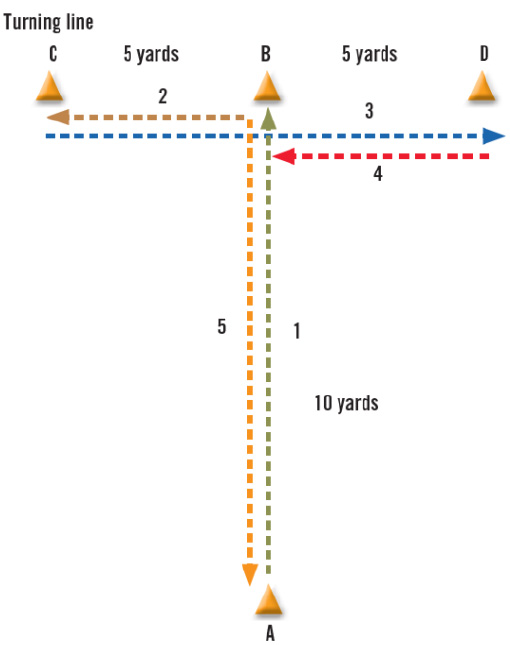 The foam-rolling group participated in instructor-led sessions three days per week for six weeks. Each session consisted of foam rolling the lower back, buttocks, quadriceps, hamstrings, calves and iliotibial bands. Specific instructions were provided on how to foam roll each body part, including demonstrations by the researchers to ensure proper technique.

Each body part was foam rolled for 20 seconds and the entire sequence was repeated three times; each session lasted approximately 15 minutes.

Members of both groups were instructed not to change their dietary or exercise habits over the course of the six-week period. After the six weeks, all participants were reevaluated using the same assessment battery used at the beginning of the study. In addition, those in the foam rolling group were asked to complete a Perceived Performance Improvement Questionnaire.

All 34 participants completed the assessment protocol, and all members of the foam-rolling group completed 18 foam-rolling sessions during the six-week training period.

Answers to the Perceived Performance Improvement Questionnaire are presented in Table 3. It was found that the foam-rolling group felt more flexible and felt like they could jump higher at the conclusion of the study.

The purpose of this study was to determine the training effect of foam rolling on ankle and knee ROM, hamstrings flexibility, agility and vertical jump height. This research found a statistically significant improvement in lower back and hamstring flexibility (as measured by the sit-and-reach test) after six weeks of foam rolling. In addition, foam rolling did not negatively affect athletic performance, as measured by agility or vertical jump height.

“The fact that foam rolling does not do any harm in terms of performance is an important finding,” says Dr. Porcari. “This means that—in contrast to static stretching—foam rolling may be performed during the warm-up, potentially without any negative effect.”

In addition, the participants reported that, while foam rolling can sometimes be uncomfortable or even painful, they felt good afterward. And, as Table 3 shows, most participants felt more flexible and like they could jump higher at the end of the study, and about half felt they had improved in all elements tested. These findings regarding the perceived benefits may explain some of the allure of foam rolling, despite the lack of conclusively supportive evidence. 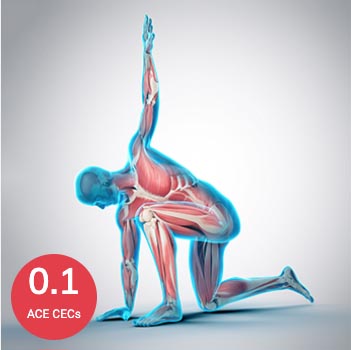 True, some people did not win the genetic lottery with respect to gaining pounds, but that doesn’t mean they can’t tweak their diets to stave off weight creep. A study in The American Journal of Clinical Nutrition involving more than 14,000 adults over a 20-year period discovered that increasing one’s intake of fruits and vegetables can be protective against a genetic susceptibility to obesity. The impact was more robust in people whose genes strongly edged them toward obesity, and the most effective choices for overriding fat genes were berries, citrus fruits and leafy green vegetables.