How Much Protein Should You Eat—and When?

Researchers find we’re eating too much protein at the wrong times—and not enough at the right times. 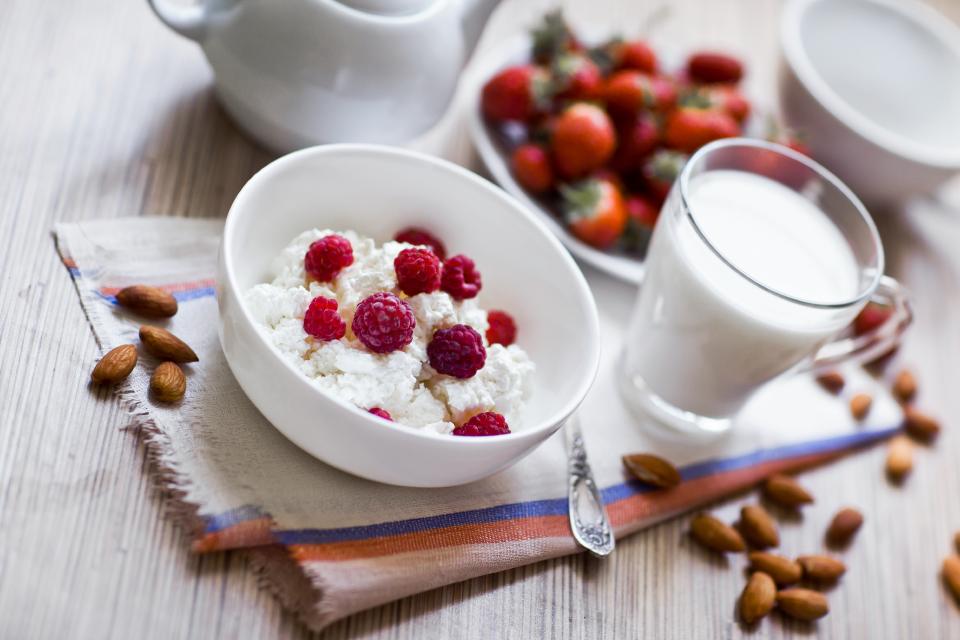 Protein is always a hot topic. Carbs have been demonized. Fat has been on the chopping block. But protein? It earns a health halo, often connected to everything from weight loss to muscle gains. Maybe this is for good reason. After all, researchers and protein experts around the world are investigating protein’s optimal role in aging and satiety across the lifespan. Yet that doesn’t mean our diets get protein right. Researchers find we’re eating too much protein at the wrong times—and not enough at the right times. Namely, we need more high-quality protein at breakfast and less protein at dinner, the research suggests (Mamerow et al. 2014).

Protein: How Much Is Enough?

Nutrition experts recommend that protein accounts for 10%–35% of all the calories we eat daily (IOM 2002). How are we doing with that recommendation? A paper published in the American Journal of Clinical Nutrition found that, on average, men and women up to age 70 get about 15% of total calories from protein. While that is within the 10%–35% recommendation, the author of the paper suggests boosting the minimum to 25%, “given the positive benefits of higher protein intake on satiety and other physiologic functions” (Fulgoni 2008).

Examining diet in more depth exposes us to a raft of acronyms representing how much of specific nutrients the experts say we should consume. For instance, the Institute of Medicine has several DRIs (dietary reference intakes) for protein:

All these DRIs are based on nitrogen balance studies, under conditions of energy balance (DGAC 2010; Rodriguez 2015).

The most familiar of these acronyms is the RDA—which for protein is 0.8 gram per kilogram of body weight for adults 19 and older. Protein experts like Stewart Phillips, PhD, FACSM, FACN, professor at McMaster University, suggest this level can be misleading.

“That level of protein—0.8 g/kg/d or the RDA—is the minimal level of protein to offset negative nitrogen balance in 98% of individuals. The RDA is really, in my opinion, the MDI—minimal dietary intake. Thus, nothing about that level should be recommended, and you’re allowed to eat much more. In fact, for older persons and athletes, there are benefits to consuming protein at levels above the RDA.”

Recently, protein research has moved beyond investigating the optimal amount of protein to eat and has examined the optimal times to eat it. > > Nutrition researchers have found that most Western diets skew protein consumption toward the evening meal—breakfast is typically carbohydrate-rich and protein-poor, while the evening meal is often much higher in protein and calories (Mamerow et al. 2014).

In keeping with this, some of the National Institutes of Health and Nutrition Examination Survey (NHANES) data on protein consumption in the U.S. demonstrates that men typically consume about 15 g of protein at breakfast, while women consume about 10 g (Rains et al. 2013). It’s also important to note that only about 40% of Americans actually eat breakfast. Thus, not only are many Americans consuming low-protein breakfasts, but the majority are not consuming any protein at all. And there is increasing evidence of a causal link between breakfast skipping and obesity (Ma et al. 2003).

This unbalanced intake doesn’t quite give the hard-working muscles what they need, nor does it do the job of helping curb appetite throughout the day. “Unlike [with] fat or carbohydrate, the body has limited capacity to store excess dietary protein/amino acids from a single meal and use them to stimulate muscle growth at a later time,” says Douglas Paddon-Jones, PhD, professor at the University of Texas Medical Branch and a leading protein researcher. “In other words, your large salmon dinner tonight is probably not going to influence muscle growth at lunch tomorrow.”

His research and that of other experts suggest it is best to distribute protein intake evenly throughout the day, starting with breakfast. “It makes perfect sense,” says Phillips. “You’ve just gone 10 hours without food [and] your muscles are catabolic. Protein at breakfast gives your muscles their first chance to rebuild after you’ve slept. It’s a good idea to aim for around 20 g of protein if you’re younger or 30–40 g if you’re older, to give your muscle its best chance to rebuild, since these doses of protein are at the top end of what your muscles need.”

This balanced concept suggests that a moderate amount of high-quality protein three times per day may be better than the typical Western diet with too much protein at dinnertime and not enough at breakfast. The balanced protein distribution concept isn’t just about muscle growth and repair, though. It has the potential to affect many health outcomes, such as blood sugar control, moderate calorie intake and satiety (being full) (Leidy et al. 2015).

Let’s explore the benefit of satiety. Of course, being more full may affect how much a person eats. If you eat less because you’re already feeling full, theoretically that could help with weight loss.

Heather Leidy, PhD, an assistant professor at the University of Missouri, has done a lot of the work on protein and satiety. Her group recently completed a 12-week, long-term randomized controlled trial study comparing the effect of eating a normal-protein vs. a high-protein breakfast in those who had habitually skipped the morning meal (Leidy et al. 2015).

This study illustrated that those who added a high-protein breakfast containing 35 g of protein every day for 12 weeks prevented gains in body fat compared with those who continued to skip breakfast. In contrast, eating a normal-protein breakfast did not prevent fat gains. In addition, only the high-protein breakfast reduced daily hunger and led to voluntary reductions of about 400 calories in daily food intake. “These data suggest that a simple dietary strategy of eating a protein-packed breakfast can improve weight management,” Leidy said.

To read more about how the timing of protein consumption impacts the body’s ability to rebuild muscle, please see “Tapping the Power of Protein” in the online IDEA Library or in the January 2016 print issue of IDEA Fitness Journal. If you cannot access the full article and would like to, please contact the IDEA Inspired Service Team at (800) 999-4332, ext. 7.