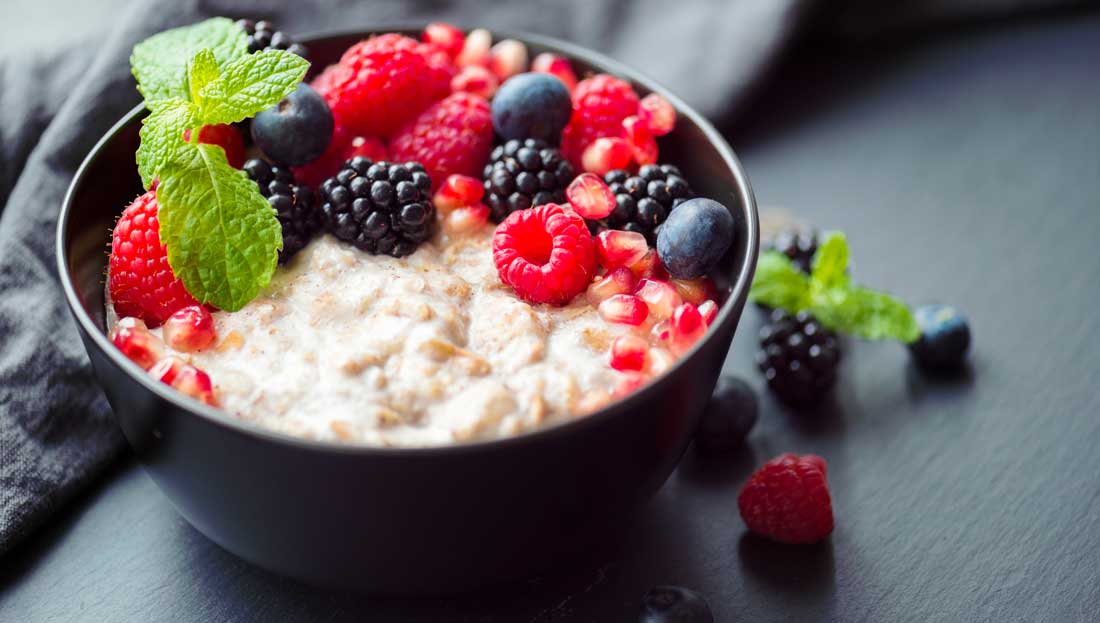 Your client’s shoulder is on fire. The excruciating pain feels like a blowtorch burning his rotator cuff. He has the biggest job interview of his life starting next week, Army Ranger school, and he must be ready. Ibuprofen, ice, cyrotherapy and turmeric—there must be some anti-inflammatory that works immediately to stop the pain and prevent damage.

If this scenario sounds familiar, it can be challenging to know how to help or advise your client. While it is beyond your scope of practice to diagnose or treat inflammation, a growing body of research suggests that certain nutritional components have anti-inflammatory properties that can help reduce the pain of inflammation. Read on to learn more about acute and chronic inflammation, its causes and effects on the body, and what the research says about nutritional strategies that are purported to help tame the fire of inflammation.

Inflammation is the immune system’s way of trying to protect the body by removing stimuli that may or not be harmful and starting the healing process (Nicholson, 2016). Harmful stimuli include bacteria, viruses, chemicals and radiation (including UV rays from the sun). Non-harmful stimuli include foods like shellfish or broccoli for those who have a food sensitivity or allergy (in other words, these foods are not harmful to most people).

Without an inflammatory response, infections, wounds and other tissue damage would not be able to heal. When an injury occurs, acute inflammation can increase blood flow to the injured area, resulting in increased redness, heat and swelling. Defense cells may bring fluid to the inflamed tissue, which also causes swelling. Though symptoms stemming from inflammation can be frustrating and sideline a person from his or her normal daily activities, the root cause of the symptoms serves a purpose. Greater blood flow and immune system activation are critical steps in the healing process.

Acute inflammation starts rapidly and becomes severe quite quickly. If it doesn’t cause excess pain, this type of inflammation should be left to run its course, explains Michael Roncarati, D.P.T, C.S.C.S., director of rehabilitation for the NBA’s Atlanta Hawks. “We probably don’t want to blunt the local inflammatory response in the first 48 to 72 hours,” says Roncarati. That’s because taming inflammation during this time may do more harm than good by shortcutting the healing process. Instead, Roncarati recommends movement and low-level muscle contraction to help control swelling.

It is important to realize that resistance training can also be a source of inflammation caused by “damage” to the muscles cells. Inflammation increases blood supply to the damaged area, leading to the release of substances secreted by the immune system as well as growth factors to help clean up the damaged tissue and remove waste products (Hamada et al., 2005; Tidball, 2005; Charge and Rudnicki, 2004). Among these substances are free radicals. While free radicals are essential for muscle functioning and muscle growth, excess free radicals can impair muscle contraction and contribute to weakness, fatigue and dysfunction (Braakhuis, 2012; Walsh et al., 2011).

In contrast to acute inflammation, which usually lasts a few days or, in some cases, a few weeks, chronic inflammation can last for several months and even years. It may be caused by any number of diseases that cause inflammation, such as asthma, rheumatoid arthritis or ulcerative colitis; exposure to a low level of a particular irritant, such as a chemical or mold, over a long period of time; or by the failure to eliminate whatever caused the acute inflammation in the first place. Additionally, chronic inflammation can eventually lead to other diseases and conditions, including atherosclerosis and some cancers.

It is worth noting that researchers have increasingly linked lifestyle factors such as being sedentary, consuming a nutrient-poor diet, experiencing high stress, and chronic use of anti-inflammatory medications with both chronic inflammation and increased vulnerability for chronic disease such as those listed above (Bosma-den Boer, van Wetten and Pruimboom, 2012).

While the root causes of chronic inflammation should always be addressed, the use of anti-inflammatory ingredients and foods can be considered as long as they do no further harm.

A healthy diet is a great place to start. In fact, a diet rich in vegetables, fruits and whole grains naturally contains plant compounds that protect the body’s tissues, including muscles, from the damaging effects of excess free radicals (Powers and Jackson, 2008).

However, you can get too much of a good thing if you load up on supplemental doses of antioxidants. Though vital to muscle health and functioning, in excess, vitamins C and E can impair training gains. Several studies have shown that supplemental doses of more than 1,000 mg of vitamin C impairs sports performance (Braakhuis and Hopkins, 2015). One study found that a daily supplement of 1,000 mg of vitamin C plus 235 mg (261 IU) of vitamin E interferes with cell signaling after resistance training, impairs increases in muscle strength due to regular strength training, and interferes with adaptations to endurance training (Paulsen et al., 2014a; Paulsen et al., 2014b).

While regular exercise can increase vitamin C requirements, a diet that includes plenty of fruits and vegetables should suffice (Gerster, 1998). The only time vitamin C supplements should be considered is in the case of deficiency or suboptimal dietary intake due to dietary restrictions.

Vitamin E prevents damage to muscle cell membranes, but vitamin E supplements aren’t necessary for the average healthy person with a sound diet. Furthermore, a significant amount of research has shown that supplemental vitamin E does not improve athletic performance or decrease muscle damage (Taghiyar et al., 2013; Ciocoiu, Badescu and Paduraru, 2007; Gaeini, Rahnama and Hamedinia, 2006; Sharman, Down and Norgan,1976). The best way to get plant compounds, including antioxidants to tame excess inflammation without decreasing the acute inflammatory response, is to consume plenty of whole fruits, vegetables and 100% fruit or vegetable juice (Heaton et al., 2017).

Cherries, especially tart ones, and tart cherry juice, however, are natural sources of anthocyanins 1 and 2, and research suggests they may help decrease inflammation, exercise-induced muscle pain and other symptoms of muscle damage (Bell et al., 2014). Another study found that two bottles of tart cherry juice per day for five to eight days prior to running or a damaging bout of elbow flexion contractions led to lower levels of inflammatory markers, while also decreasing strength loss and pain (Connolly, McHugh and Padilla-Zakour, 2006).

Limited data suggests taking 2 grams of ginger, either raw or heat-treated (as found in a bottle of spice) can decrease inflammation and delayed onset muscle soreness after exercise (Black et al., 2010). Two grams is a relatively small amount of ginger root that can be added to a smoothie without dramatically altering the flavor. A few brands of ginger ale or ginger drinks contain several grams of ginger. Some, though not all, studies show ginger may interact with blood thinners to increase bleeding. Anyone on blood thinners should speak to their physician first prior to taking large doses of ginger each day (Marx et al., 2015).

Omega-3 fatty acids, particularly EPA and DHA (found in fatty fish and some algae), are incorporated into cell membranes and improve fluidity of membranes, which may decrease muscle cell damage during exercise (Lembke et al., 2014).A diet high in saturated fats, which are hard at room temperature, makes cell membranes hard.

Studies examining EPA and DHA show they influence enzymes that help resolve inflammation. EPA also reduces COX-2 expression. While the research in this area is limited, several studies have shown that regular intake of EPA and DHA can help minimize inflammation, muscle soreness and perceived pain, while improving range of motion in untrained adults after a bout of eccentric exercise (Tsuchiya et al., 2016; Jouris, McDaniel and Weiss, 2011; Tartibian, Maleki and Abbasi, 2009). To date, there are no published studies examining EPA and DHA in trained adults.

Finally, it is worth noting that although protein is often recommended after training, particularly resistance training, to jumpstart the muscle-repair process, acute protein intake has no measurable effect on muscle damage or recovery of muscle function (Pasiakos, Lieberman and McLellan, 2014). Additionally, very limited evidence suggests curcumin, a component of turmeric, may lower the rise in inflammatory markers after exercise, but may not affect muscle soreness (McFarlin et al., 2016).

Many dietary factors can increase chronic inflammation, including consuming a diet high in trans-fatty acids, saturated fats, sugar or refined carbohydrates. Food allergies and sensitivities may also play a role in inflammation.

Cooking techniques may also increase compounds found in foods that promote inflammation. For instance, advanced glycation end products (AGEs) are found in foods cooked on high dry heat, browned foods, animal foods higher in fat and protein, sweets such as candy and cookies, fried foods and processed packaged meats. Preliminary evidence in mice suggests a diet rich in AGEs leads to an accumulation of AGEs in tendons, which may increase inflammation and alter tendon health and contribute to tendon injuries (Skovgaard et al., 2017).

A diet higher in fiber, whole grains and plant foods and low in AGEs may help reduce inflammation. AGEs can be minimized by using low heat, slow cooking methods and marinating foods. Boiling, steaming, poaching and stewing are better than cooking over high, dry heat. Acidic marinades and polyphenol-rich foods including cranberries and cherries have also been shown to decrease AGE production during cooking (Uribarri et al, 2010).

Jenna Corbin, M.S., R.D., author of Performance Nutrition for Baseball Players, takes a systematic approach to helping clients by focusing on one or two of the biggest and easiest to modify (for the individual) contributors to chronic inflammation.

“Often this means addressing any food allergies, sensitivities and intolerances, and reducing over-processed foods while increasing produce. An approach will only be helpful and effective if the individual will implement it, so working with them to decide on what to focus on first is important,” says Corbin.

Finally, remember that although it can be tempting to use supplements that immediately decrease inflammation, this approach may actually slow down the healing process. The best advice you can give your clients is to follow a sound diet rich in plant-based foods and fatty fish, which can go a long way toward contributing to lower levels of chronic inflammation.

Marie Spano, M.S., R.D., C.S.C.S., C.S.S.D., is a nutrition communications expert and sports nutritionist for the Atlanta Hawks and Atlanta Braves. She is co-editor of the NSCA’s Guide to Exercise and Sport Nutrition and author of hundreds of magazine and trade publication articles on a variety of topics ranging from novel food ingredients to optimal sports performance recovery foods.